Political ads have become a commonplace fixture on our screens, and they’re often generic. But last month, a new ad from a Democrat newcomer in Louisiana caught people’s attention with its wholesomeness and frankness, and intimacy.

In the ad, candidate Katie Darling speaks about Louisiana’s outdated abortion ban and the lack of support the state gives poor pregnant women all while showing actual footage of her going through labor earlier this summer. (She had a boy)

“I really wanted to share my story of what it’s like to be a pregnant person in Louisiana during the summer of 2022,” she told MSNBC’s Ali Velshi.

Earlier this month, Darling lost to incumbent minority whip Steve Scalise, 73 to 25 percent. She wasn’t expected to unseat one of Congress’ biggest Republican powerbrokers in a deeply red district, but it’s really sad the result was so lopsided.

“We need more diverse representation in office,” Darling said. “When there are women in office…we can directly speak to the current impact of [abortion bans] and we can draft legislation that helps provide resources for producing healthy families.”

The ad is below. (Source MSNBC) 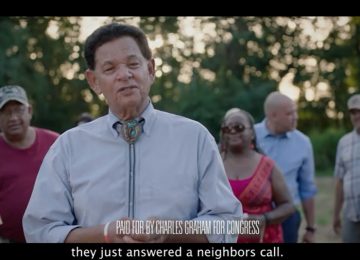